Ok, so lasagna is our once-a-year splurge. It’s delicious but not necessarily the healthiest choice. Our favorite lasagna involved a long-cooking Bolognese sauce. And it is delicious.

But for this past New Year’s we decided to give up eating critters. This wasn’t necessarily a health choice and certainly not a moral choice. Maybe a little bit of a social choice (the environmental cost of meat production is catastrophic). But mostly it was a champagne-fueled New Year’s Eve conversation with our friend Cara in her gorgeous apartment overlooking the Hudson River.

Cara was vegan for several years and had slowly moved back through vegetarian to omnivore. She chatted about how much better she felt as a vegetarian (while we were enjoying that long-cooking bolognese-based lasagna). So the small group of us decided to try vegetarian for 90 days. We toyed with vegan but seriously cheese is just too damn delicious. And including cheese and eggs make it easier to give up lamb chops and rib eyes. Life is a compromise.

So early on January 2nd we ventured out to the wonderful new grocery store in our area armed with a list of stuff that vegetarians eat: tofu, black beans, vegetables…I think that was the pretty much the depth of our study. We just wandered in, grabbed a cart (which meant delivery was definitely happening) and strolled the aisles filling our basket. When we got home we had to figure out what we could make with all this new food.

At first it was a lot of fun trolling the Interwebs looking for vegetarian recipes. Hell, even Ree Drummond has a veggie burger and she’s married to the Marlboro Man.

N.B. – I still have not found or created a veggie burger that’s not just mush nestled in a bun waiting to smoosh out as soon as you take the first bite.

Not even at the much-lauded Superiority Burger in the East Village. We schlepped from Herald Square on foot in the snow with high expectations! And after crowding into their teeny tiny little take-out joint? All four of us left hungry. The burger? Meh. What’s that about?

If Burger is in the name of your restaurant, the damn thing should taste better. And be less mushy.

I borrowed about two dozen cookbooks from the New York Public Library. Some with very catchy names (Thug Kitchen: The Official Cookbook: Eat Like You Give a F*ck) while others wander into the clichéd 1970s granola scene (I won’t name names here). Overall I read through them, learned about pulling satisfying flavors out of non-meat products and created a decent foundation for wandering the produce aisle without a list.

But some things I just don’t get. I don’t see why anyone eats tempeh a second time. I mean — what is that!?!? I know there’s a special cooking method but it’s basically just fermented tofu rubber. And Vegenaise? Just eat a damn egg! Or skip the slimy stuff altogether.

Along the way we’ve tried a handful of vegetarian lasagna recipes and eaten far too much lasagna this year. I tweaked, twisted and tamed them into what you have here. And, compared to our favorite meat version (which takes the better part of a day) this comes together pretty quickly.

This lasagna is so good, I’m planning to pull it out for our “non-Thanksgiving Thanksgiving” in Texas next month. Yes, Texans will be eating vegetarian lasagna.

Read on intrepid friends. Read on. 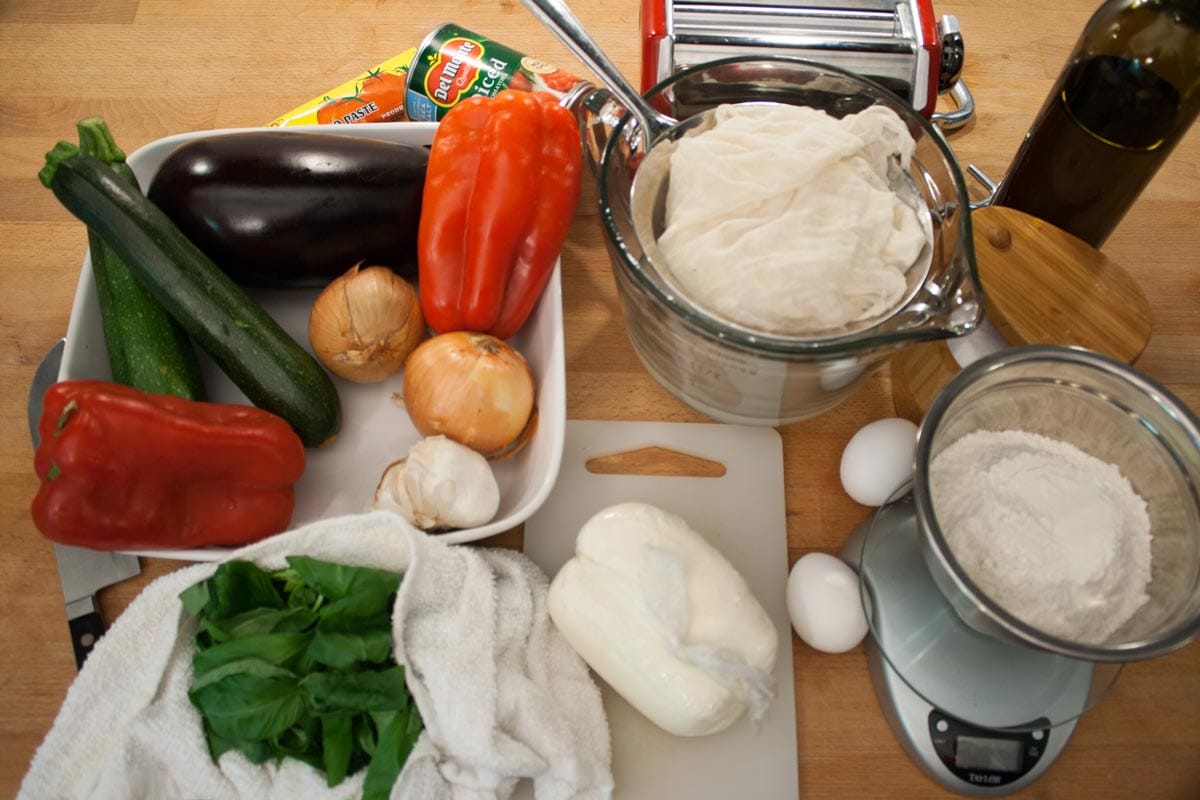 I chop and arrange the vegetables for the ratatouille (’cause that’s what the sauce really is) on a single huge cutting board. Then I can transport them en-masse to the counter next to the stove. 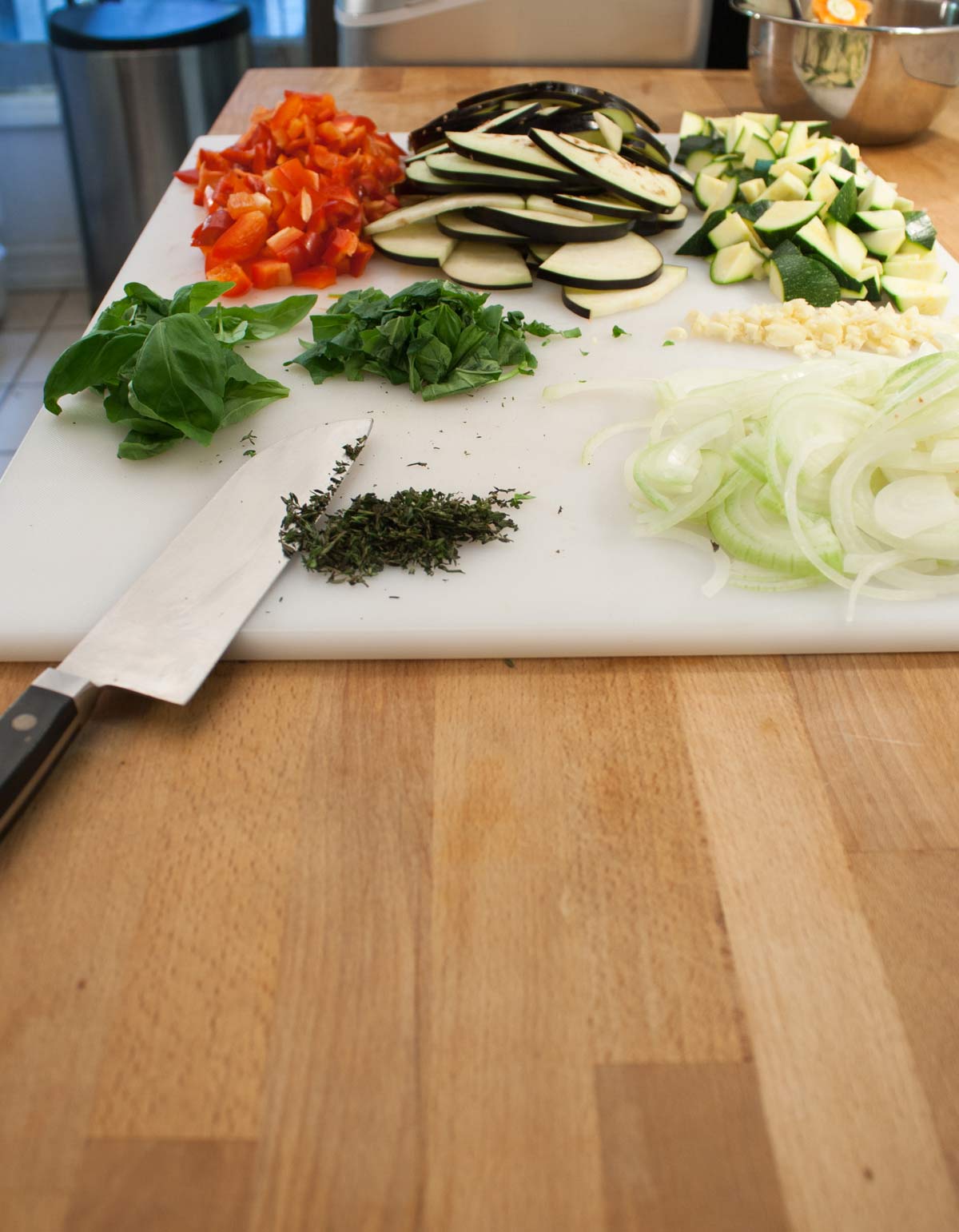 The sauce comes together in a few minutes and can be done ahead of time. 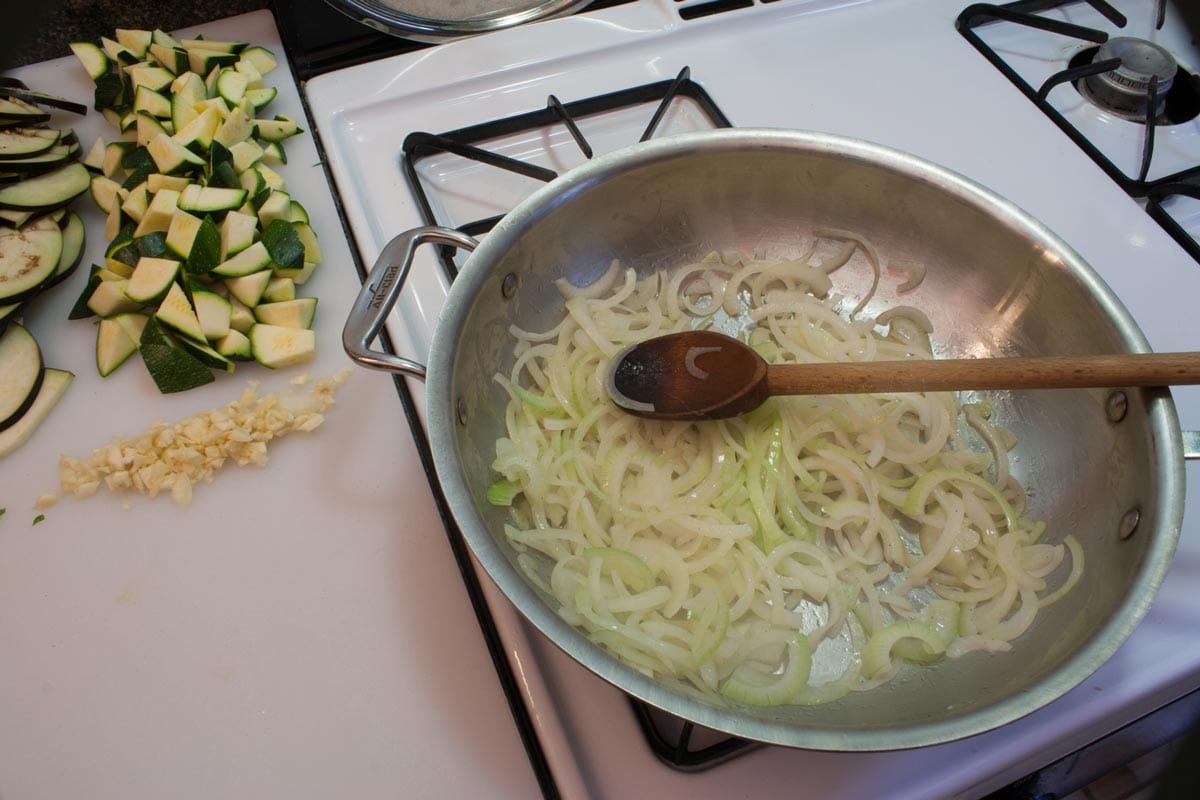 We’re gonna’ use the cooking veggies down below to steam and soften our eggplant. Otherwise it’s like trying to stir floor tiles into the sauce. There will be tomatoes splattered everywhere! 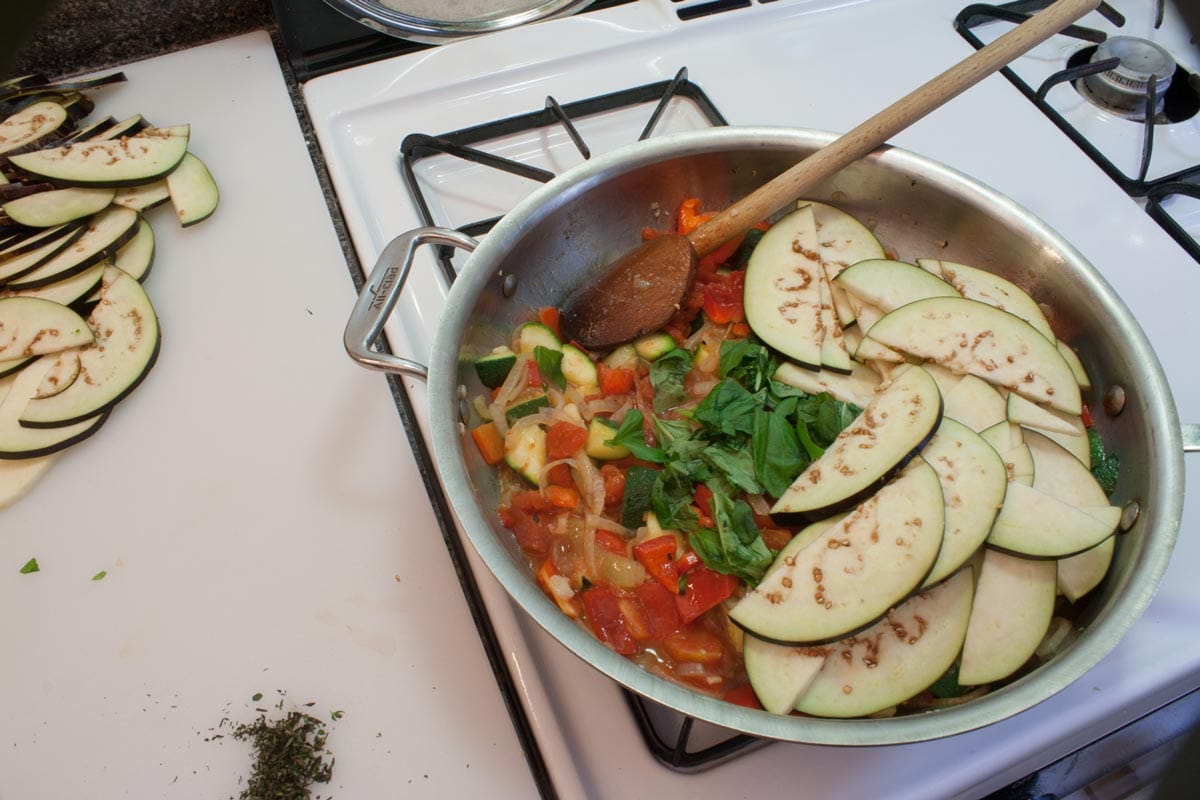 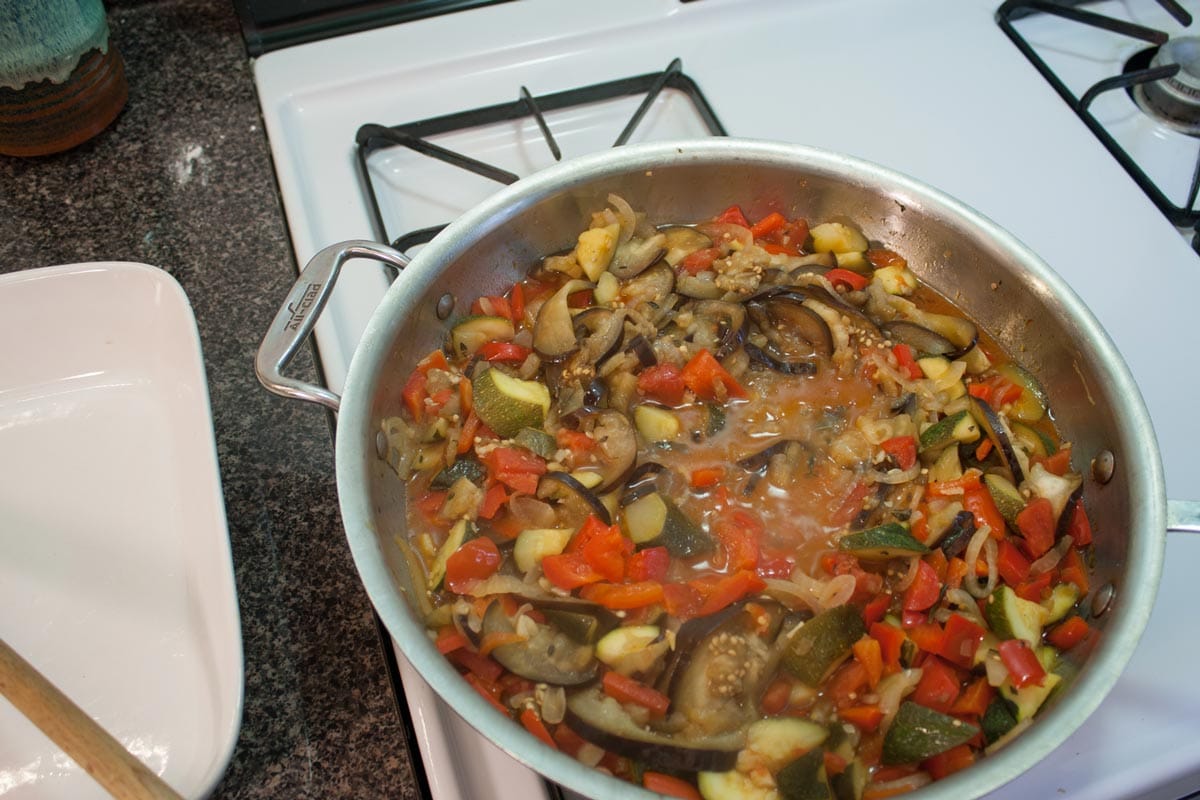 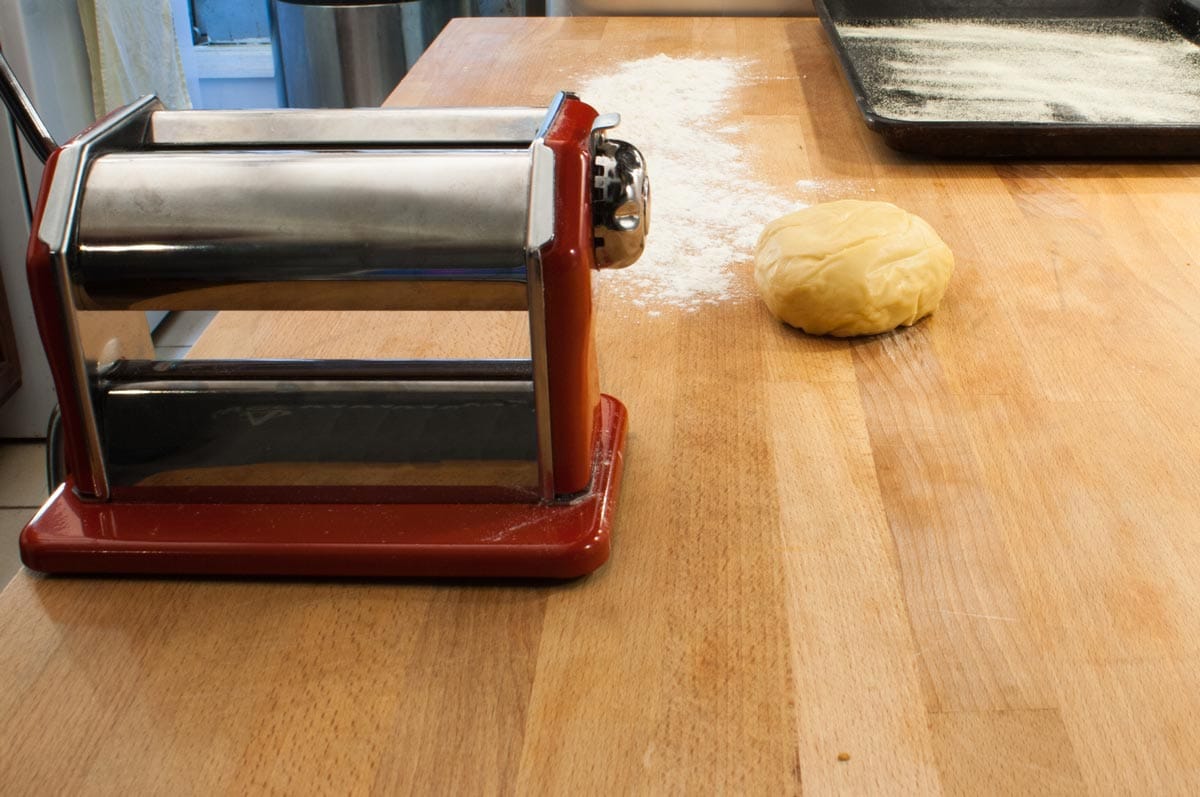 If you begin to get a ‘fat’ end try feeding that through first. The pressure will sometimes even things out. If the pasta gets sticky smooth a little flour on the surface. But very little. Just enough to keep it from sticking. Lay flat on the counter, trim off and discard any narrow ends. You want fairly uniform width lasagna sheets.

I have no idea how long you can keep the rolled sheets before baking. I’ve left them for a couple hours without any harm.

Bring everything to one place and get ready to layer! 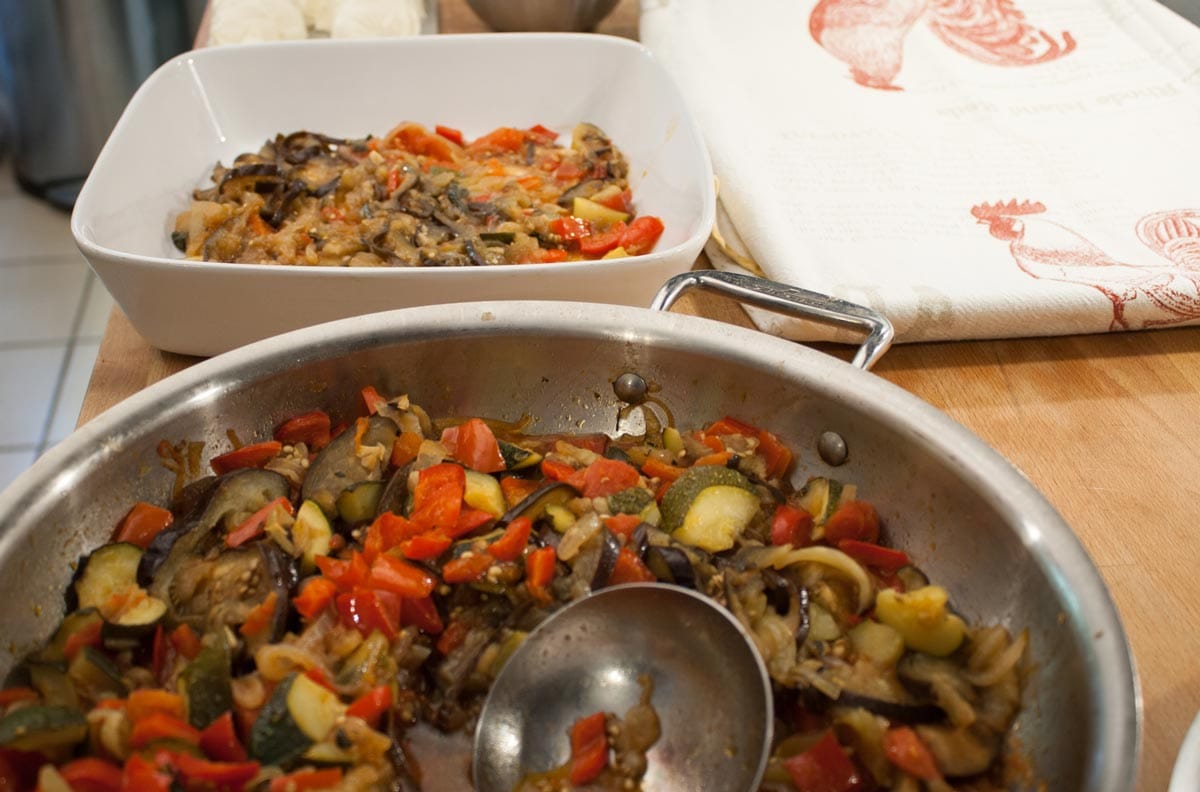 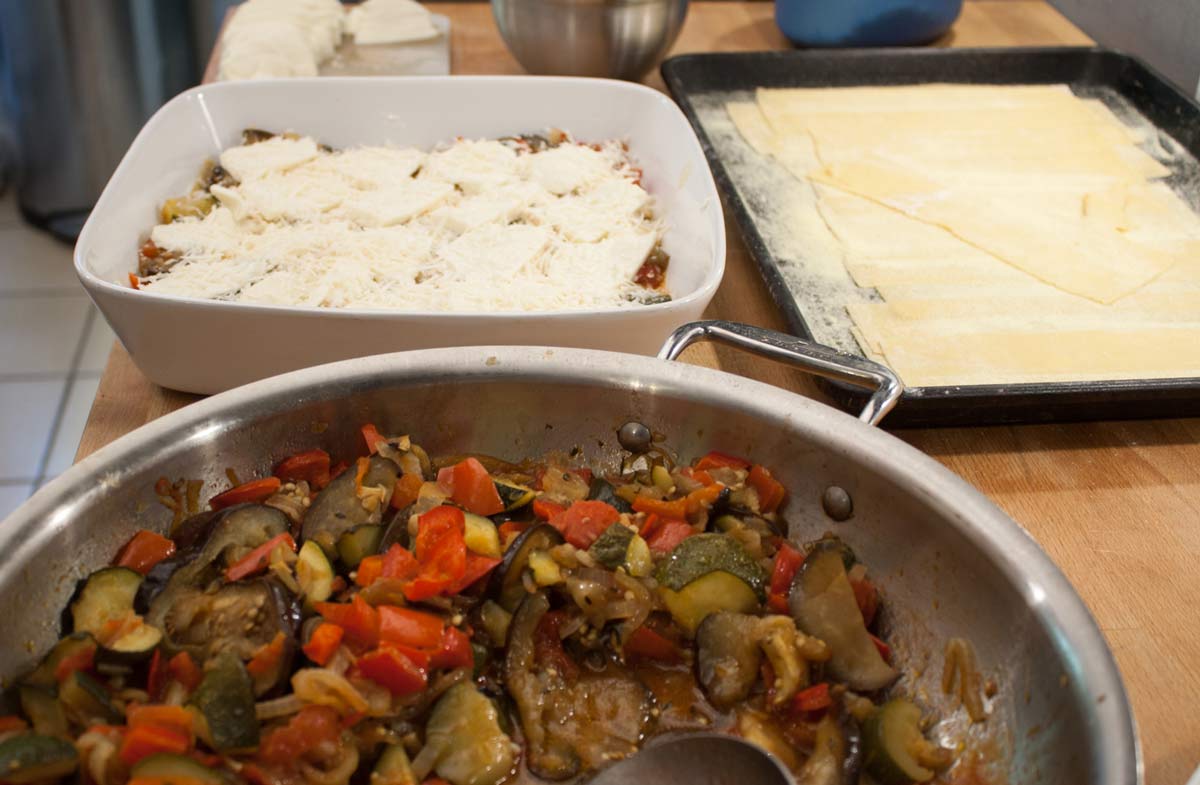 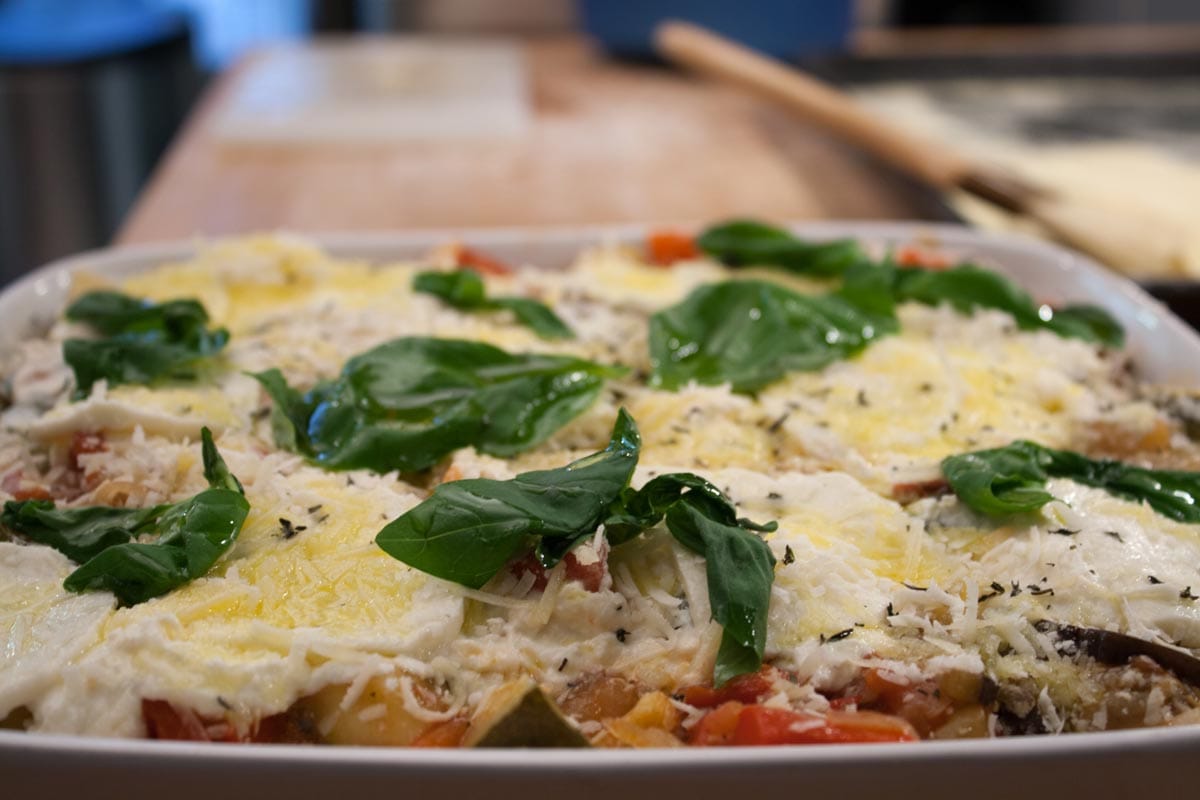 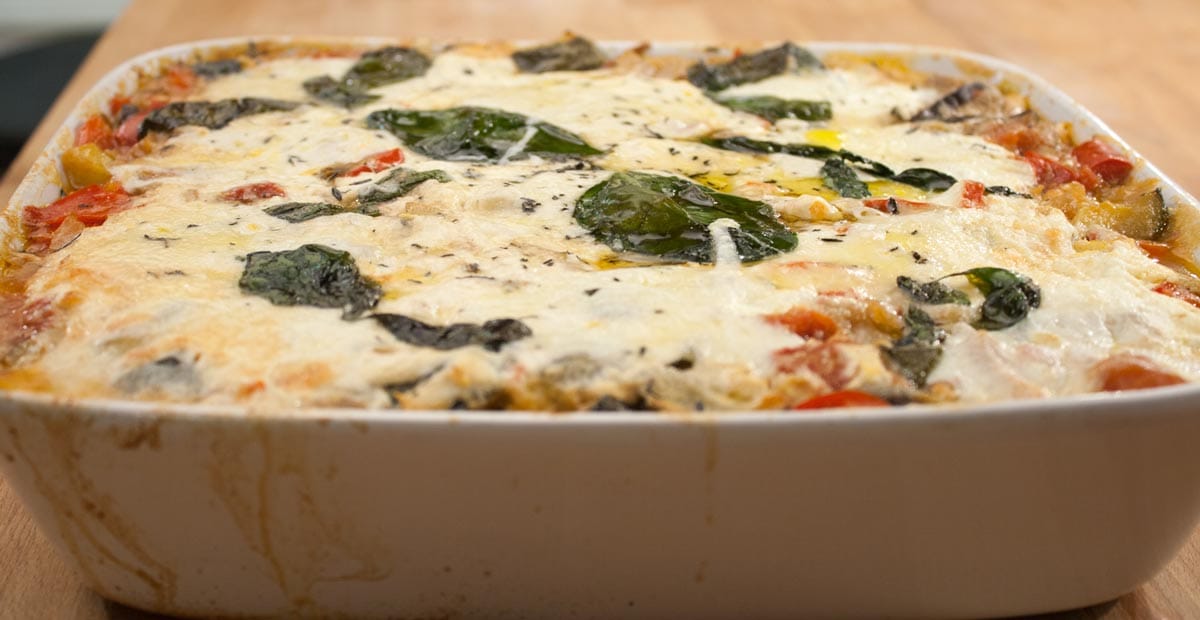