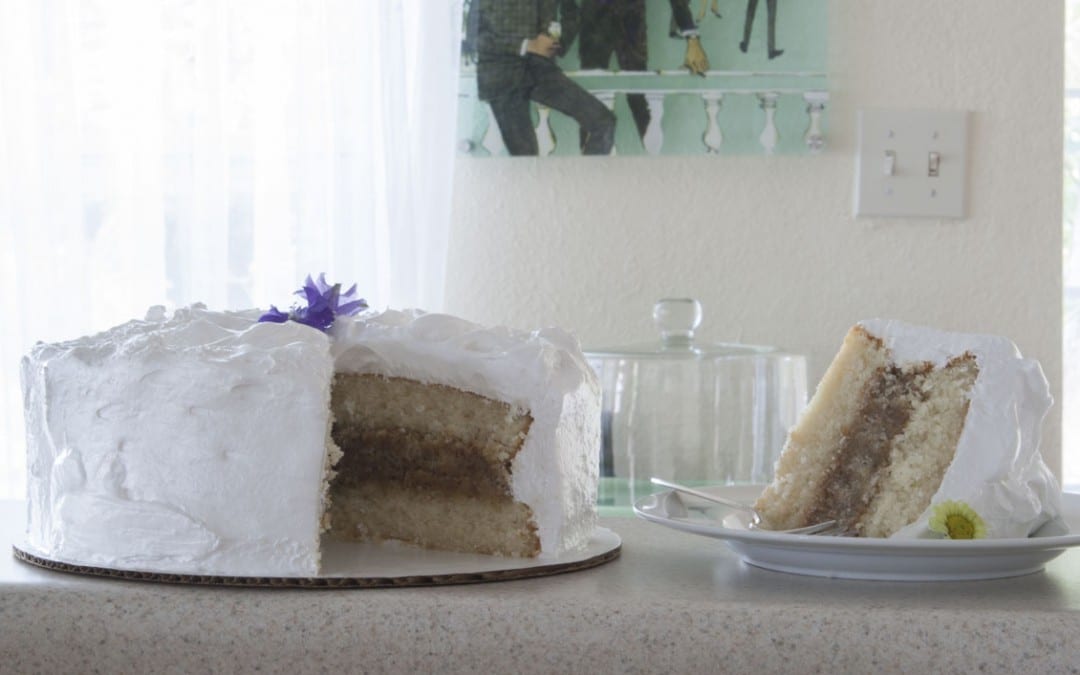 Lane Cake first appeared in Emma Rylander Lane’s (of Clayton, Alabama) self-published Some Good Things to Eat (1898). Half a century later, her “Prize Cake” was popularized with the theatrical release of Harper Lee’s To Kill a Mockingbird. As Scout explains “Miss Maudie Atkinson baked a Lane cake so loaded with shinny [moonshine] it made me tight.” The lauded ingredient—bourbon—shows up (strongly) in the filling. Everywhere we take this cake, we take the prize. The bourbon you choose will have a strong impact on the flavor of the filling – so choose carefully. Whiskies or ryes will work; just keep their flavor profile in mind. Of course, you’ll need to test – perhaps often & liberally – to choose the correct spirit. The recipe below is adapted from Cook’s Country (membership required) for a 2-layer 9″ square cake.

What to do with left-over egg yolks?

We store them for up to a day by pushing plastic wrap against the top of the yolks. Normally since cake and ice cream go so well together we make an ice cream. We’ll post a recipe – and link it here – soon.

Do Ahead Hint: Make the filling and store it for up to 2 days in a tightly covered container in the refrigerator. Allow it to come to room temperature before attempting to fill the cake. Completely cooled cakes can also be baked up to 2 days ahead of time and stored (tightly wrapped) at room temperature.

I have a difficult time eye-balling ‘divide equally’…so I use a kitchen scale to weigh pans as I add batter. First, I know that my mixer bowl weighs 4lbs 6oz. When I’m done mixing, I weigh the completed mixture – subtract the bowl weight – and divide by 2 (or as many pans as I’m using). Then I set the first pan on the scale, reset the weight to zero by pressing the “on/off” button and scrape 1/2 the calculated weight of the prepared batter into the first pan and repeat with the second. By doing this my cake layers turn out almost exactly the same thickness and cook evenly.

This can only be done when you’re ready to frost the cake. No do-aheads.

If your cakes domed A LOT use a large bread knife to trim the top off of each layer to make a ‘relatively’ flat cake layer. But don’t fret about this. This is a homemade Southern cake. It ain’t s’posed to be perfect, ya’ hear? Don’t make me stop this kitchen…

Cover with a cake dome (plastic wrap will stick to the frosting) and store at room temperature for up to 2 hours. If you must store longer, refrigerate up to 2 days BUT bring to room temperature before serving. 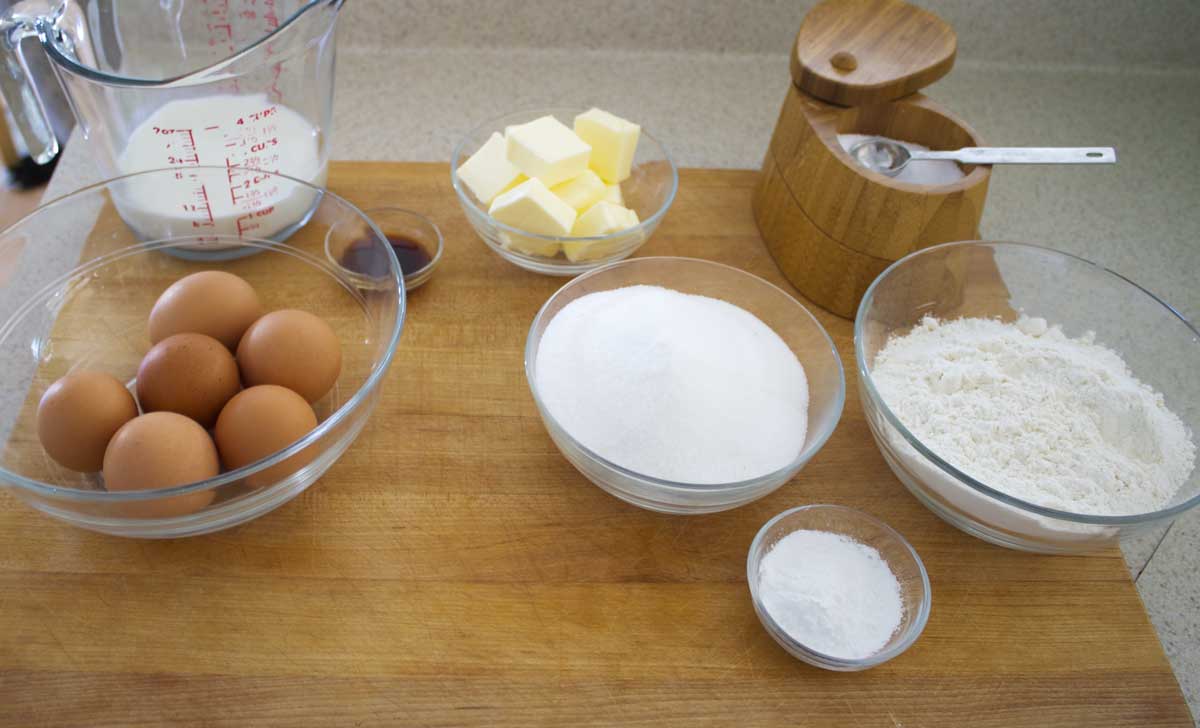 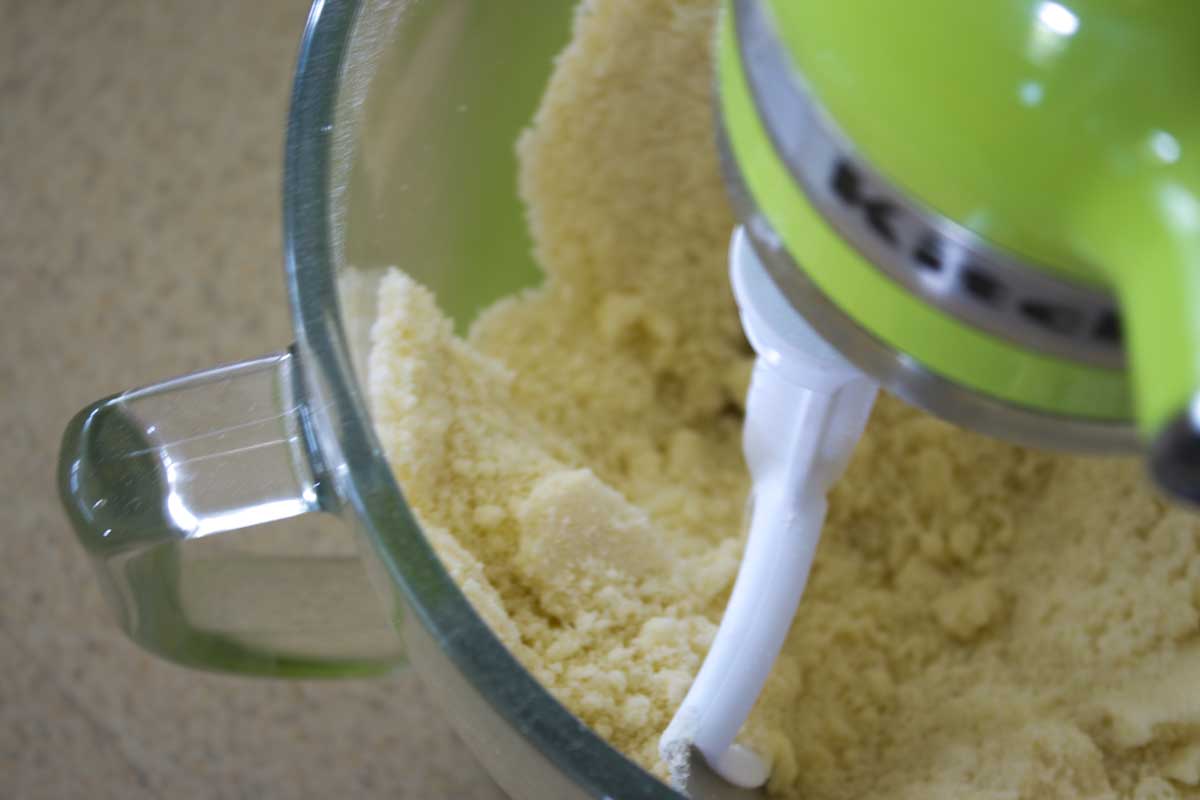 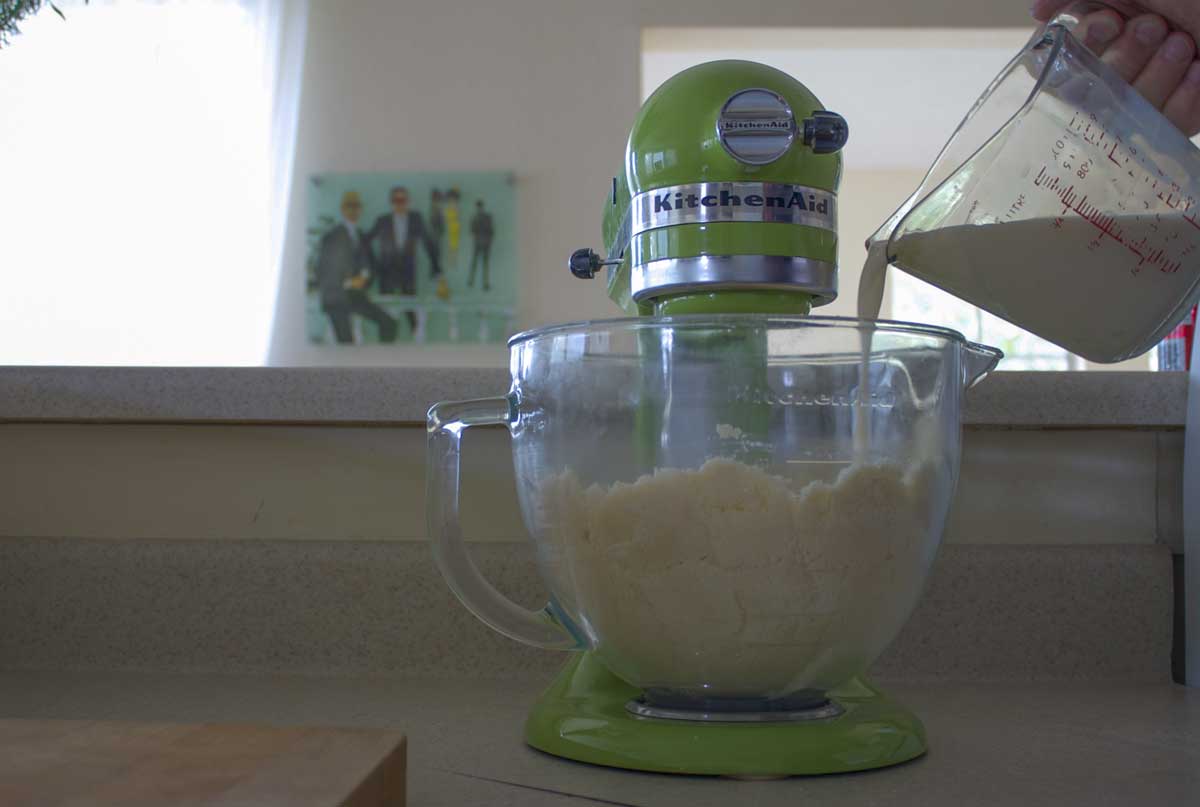 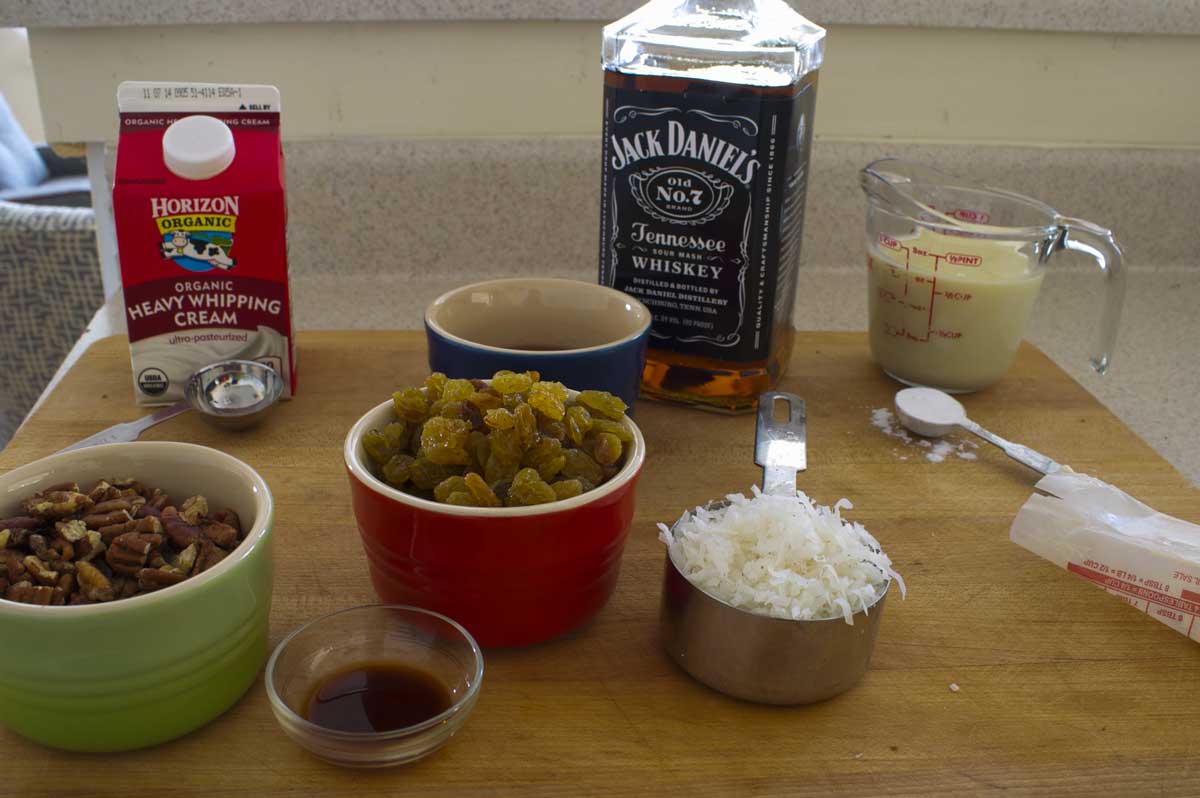 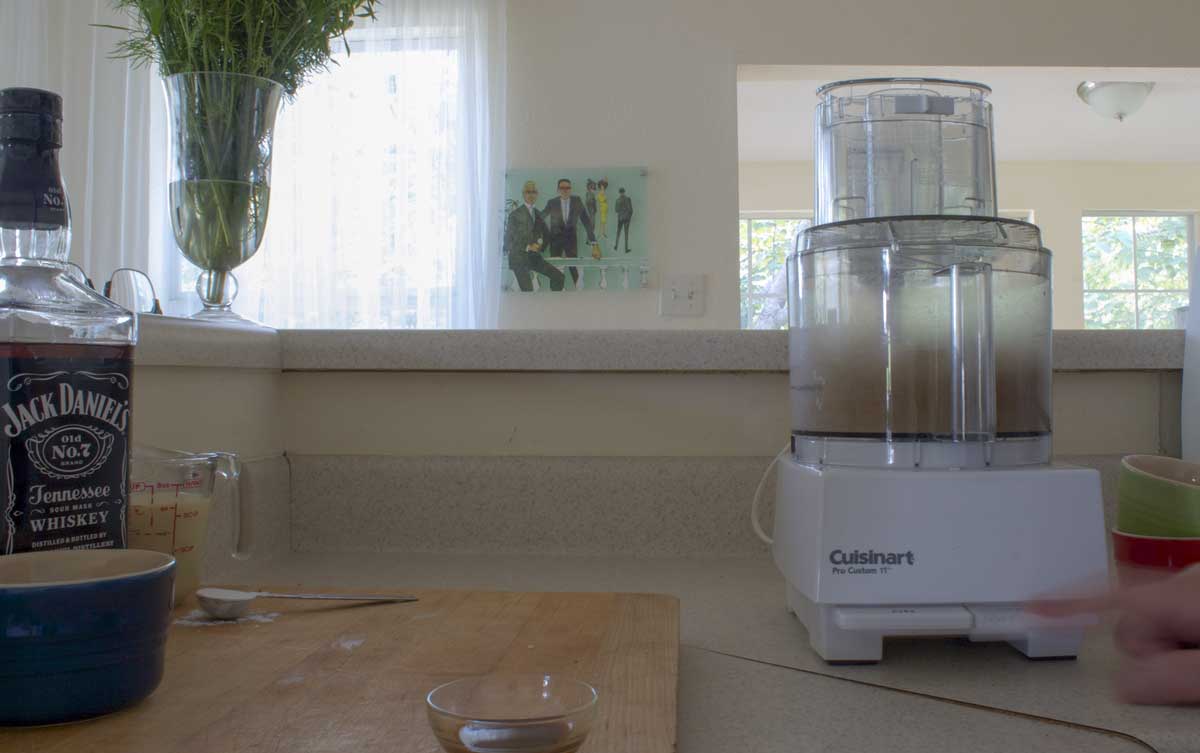 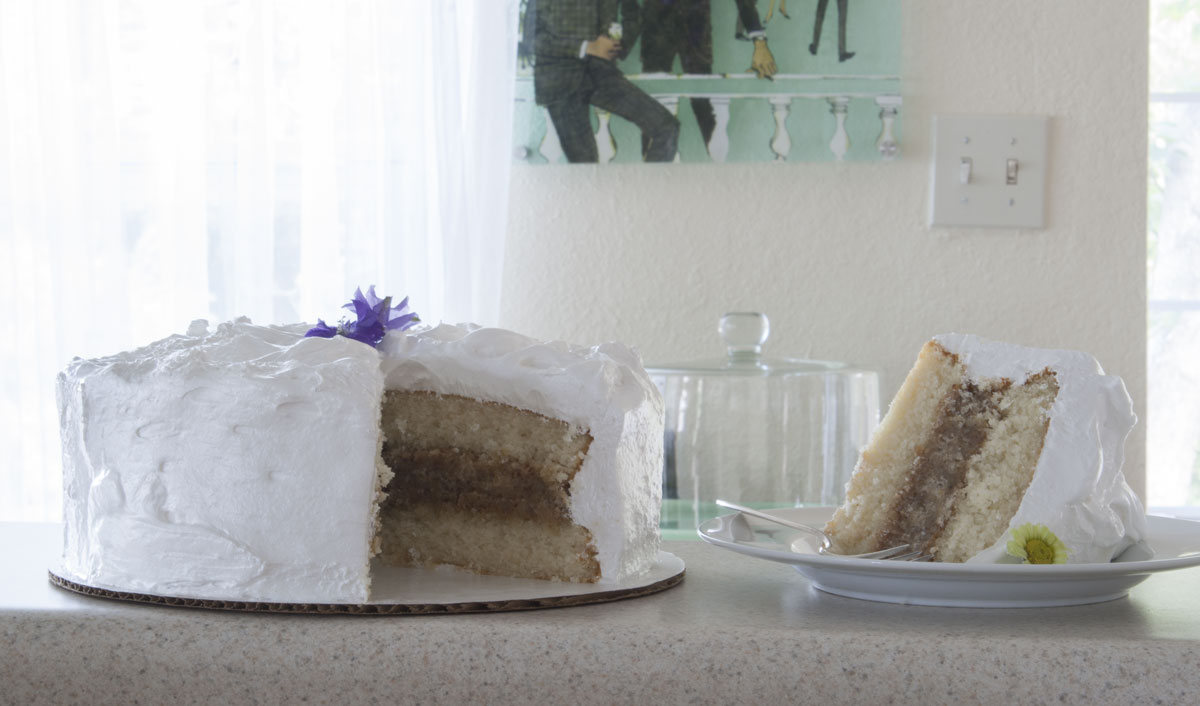